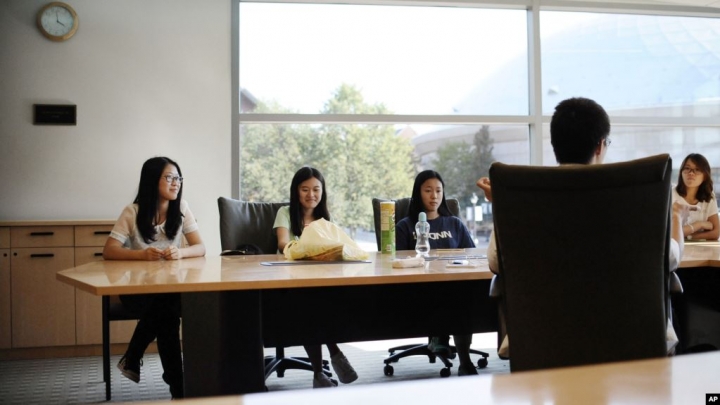 On its large campus in the middle of America, the University of Illinois at Urbana-Champaign is trying to keep the fast-spreading coronavirus away from its students.


The school has one of the highest percentages of Chinese students among U.S. universities. It has closed study programs in China for the spring and banned students from traveling to the country for school-related purposes. It has told teachers to follow federal travel advisories that warned against going to China.


“We want to take all of the precautions we can so…we keep our community healthy,” said Robin Kaler. She is associate chancellor for public affairs at the University of Illinois, 217 kilometers south of Chicago.

The first human-to-human transmission of the disease in the United States was confirmed in Illinois.


More than 350,000 Chinese students are studying at universities and colleges in America. Also, about 10,000 American students attend school in China.


Many of the Chinese students in the U.S. have traveled to China in recent weeks, which makes it possible that the virus might spread at universities.


“Colleges and universities are very much on the front line of those because of our role as global institutions,” said Sarah Van Orman. She is chief health officer at the University of Southern California (USC).


In the American capital of Washington, D.C., public health officials say the risk of catching the virus remains low. Doctors, however, continue to see patients who are worried that their infection might be the coronavirus.


In medical centers and hospitals, doctors are preparing emergency systems and studying protocols in case the virus does begin to spread.


The Centers for Disease Control and Prevention (CDC) reported on Sunday that 11 cases of the Wuhan coronavirus had been confirmed in the U.S. They were in California, Washington state, Illinois, Massachusetts and Arizona. Officials expect that number to rise. Several possible coronavirus cases are being investigated in Washington, D.C., Maryland and Virginia.


Last week, the State Department advised Americans not to travel to China, where the number of deaths is in the hundreds.


Though much is unknown about the Wuhan coronavirus, health officials have advised that signs of the disease usually appear within two to 14 days. The signs can include high temperature, coughing and trouble breathing


Words in This Story

campus – n. the area around a university, college or school

precaution – n. something that is done to prevent possible harm or trouble from happening in the future

chancellor – n. the head of some U.S. universities

transmission – n. the act or process by which something is spread or passed from one person or thing to another

role –n. the part something or someone plays

protocol – n. a system of rules that explain the correct conduct and procedures to be followed in formal situations

respiratory – adj. of or relating to breathing or the organs of the body that are used in breathing

syndrome – n. a disease or disorder that involves a particular group of signs and symptoms