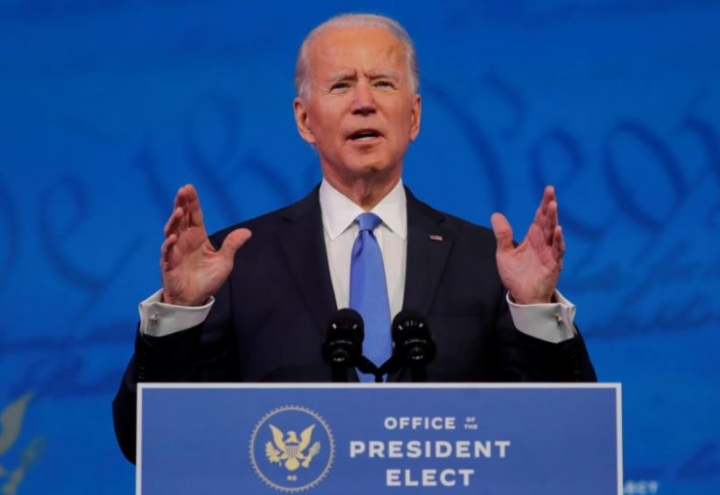 The 538 members of the Electoral College met Monday in places across the United States. The electors officially cast 306 votes for Joe Biden as the country’s next president. 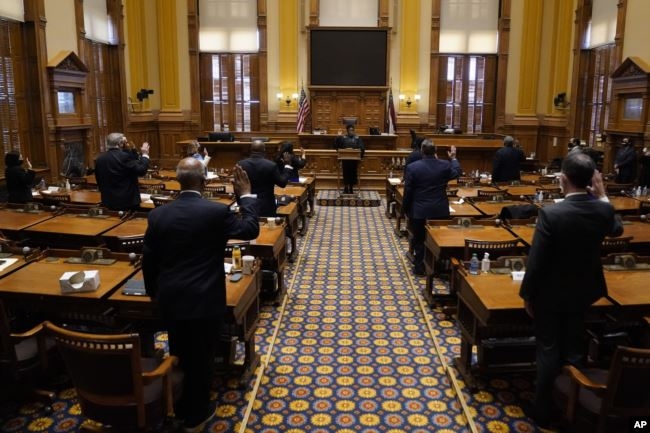 Members of Georgia's Electoral College are sworn in before casting their votes at the state Capitol, Monday, Dec. 14, 2020, in Atlanta. (AP Photo/John Bazemore, Pool)

Biden said in a statement prepared for an evening speech. “We the people voted. Faith in our institutions held. The integrity of our elections remains intact. And so, now it is time to turn the page. To unite. To heal.”

The Electoral College is the process by which presidential electors give the state’s electoral votes to the winner of the state’s popular vote. The results are sent to government officials and Congress.

This year, the event took on added importance because President Donald Trump has not admitted defeat. Trump has claimed he won the election and accused others of cheating. Trump and his supporters also have disputed the results of the election with more than 50 legal actions without success.

Security in several battleground states was increased to protect the electors from possible violence. A state official told CNN that Arizona held its Electoral College meeting at an undisclosed location for the safety of its electors. 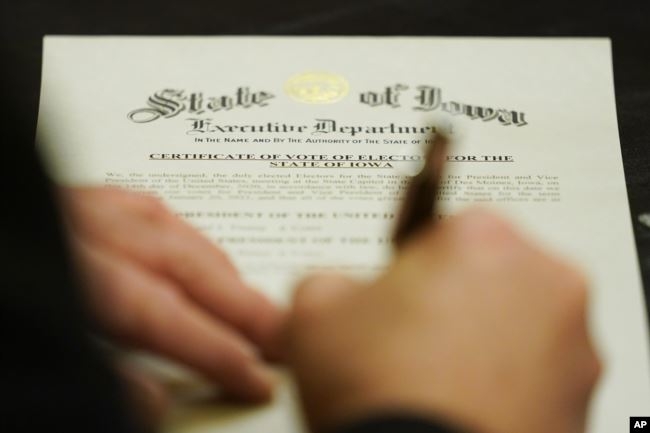 A member of Iowa's Electoral College signs the Certificate of Vote of Electors for the State of Iowa, Monday, Dec. 14, 2020, at the Statehouse in Des Moines, Iowa. (AP Photo/Charlie Neibergall)

In Michigan, the state’s legislative offices were closed after lawmakers from both Republican and Democratic Parties had received death threats. But the state’s 16 electors met in a Capitol ceremony to cast their ballots for Biden who won the state by 154,000 popular votes.

Michigan’s Republican Speaker of the House Lee Chatfield said the state would not change its vote to give Trump a victory. He said in a statement, “I fought hard for President Trump. Nobody wanted him to win more than me... I can’t fathom risking our norms, traditions and institutions to pass a resolution retroactively changing the electors for Trump.”

As Wisconsin electors met to give the state’s 10 electoral votes to Biden, the Wisconsin Supreme Court dismissed the latest effort from Trump’s campaign to overturn the state’s election results. Biden won the state by more than 20,000 votes and the recount requested by Trump added another 87 votes to Biden.

Pennsylvania gave its 20 electoral votes to Biden, the Democratic candidate, who won the state by about 81,000 popular votes. The state’s Republican lawmakers, however, made what they called a “procedural vote” in the possibility that the courts would award the state’s electoral vote to Trump.

Michigan, Pennsylvania, Wisconsin, Arizona and Georgia are the battleground states that voted for Biden to give him the presidency. The states had voted for Trump in 2016. 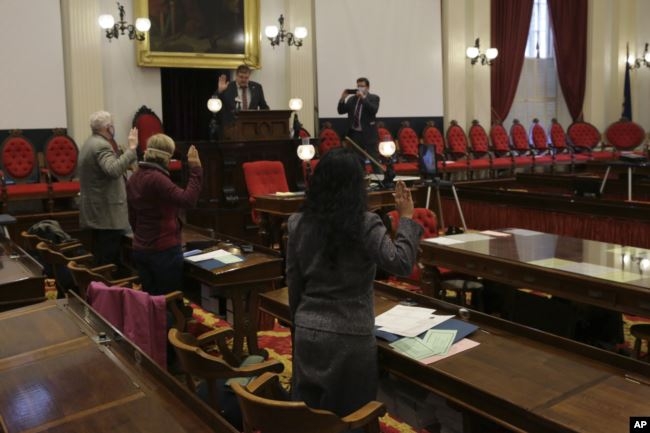 Vermont became the first state to report its electoral college vote. The state’s three electoral votes went for Biden at 10:11 in the morning on Monday. In Nevada, the six presidential electors voted for Biden using video conferencing because of the coronavirus health crisis.

A member of Congress or a federal office holder cannot serve as presidential electors. They are often well-known people selected by the political parties like former President Bill Clinton and former Secretary of State Hillary Clinton of New York. But the nation’s capital of Washington, D.C. chose as its electors three women, a nurse, a food store worker and one who supports the city becoming a state. 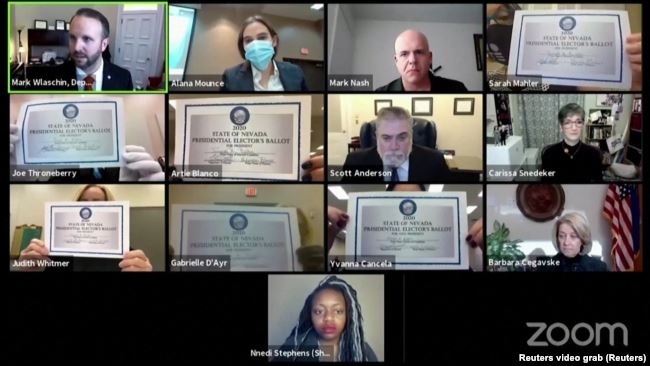 Now that Biden has received more than 270 electoral votes, a copy of the official Electoral College results will go to the president of the Senate, who is Vice President Mike Pence by December 23.

The Constitution states that the president’s term in office begins on January 20. And Joe Biden is expected to be sworn in at noon as the 46th president of the United States.

integrity –n. the quality of being honest and fair

fathom –v. to understand the reason for something

retroactively –adv. effective from a particular date in the past

procedural –adj. related to established ways of doing things; having to do with procedures