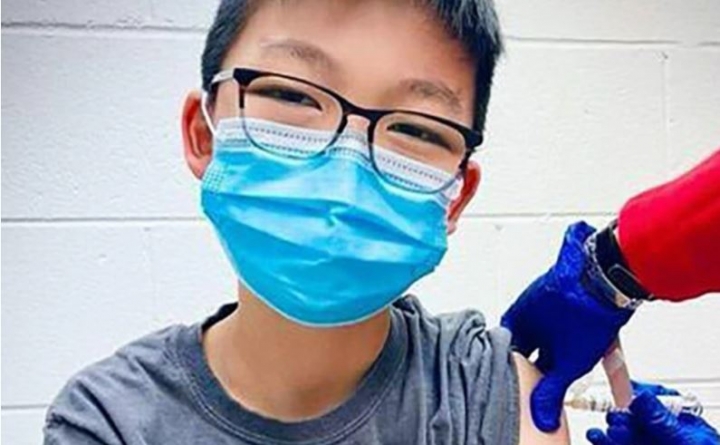 Pfizer announced Wednesday that its COVID-19 vaccine is safe and strongly protects children as young as 12. The news may lead to vaccinating that age group before they return to school in the autumn.

Most COVID-19 vaccines available are for adults, who are at higher risk from the coronavirus. Pfizer’s vaccine is approved for children ages 16 and older. But vaccinating children of all ages might be important to stopping the spread of the coronavirus.

In a study of 2,260 U.S. volunteers ages 12 to 15, early results showed there were no cases of COVID-19 among those fully vaccinated. There were 18 cases of coronavirus infection among those given a placebo, Pfizer reported.

The study was small and has not yet been published. However, researchers reported high levels of antibodies, somewhat higher than were seen in studies of young adults.

The children had side effects that were similar to those of young adults, the company said. The main side effects are pain, high temperature, chills and tiredness, especially after the second injection. The study will continue to follow the children for two years for more information about protection and safety.

Pfizer and its German partner BioNTech plan in the coming weeks to ask the U.S. Food and Drug Administration and European regulators to permit emergency use of the vaccine starting at age 12.

“We share the urgency to expand the use of our vaccine,” Pfizer cheif Albert Bourla said in a statement. He expressed “the hope of starting to vaccinate this age group before the start of the next school year” in the United States.

Pfizer is not the only company seeking to lower the age limit for its vaccine. Results also are expected by the middle of this year from a U.S. study of Moderna’s vaccine in 12 to 17 year olds.

Because the findings were promising, the FDA already permitted both companies to begin U.S. studies on children 11 and younger. They plan to study children as young as 6 months old in the future.

The chief of BioNTech, Ugur Sahin said in a statement: “We are longing for a normal life. This is especially true for our children.”

AstraZeneca last month began a study of its vaccine on children ages 6 to 17 in Britain. Johnson & Johnson is planning its own studies. In China, Sinovac recently announced it has given new data to Chinese regulators showing its vaccine is safe in children as young as 3.

One important question is the amount of vaccine: Pfizer gave the 12-and-older children the same amount as adults. It is testing different amounts in younger children.

It is unclear how quickly the FDA would act on Pfizer’s request to permit vaccination starting at age 12. The agency has taken about three weeks to study and approve each of the vaccines now available for adults.

Children represent about 13 percent of COVID-19 cases in the U.S. Children are far less likely than adults to get seriously sick. However, at least 268 children have died from COVID-19 in the U.S. and more than 13,500 have been hospitalized, the American Academy of Pediatrics reports. A small number have developed serious swelling linked to the coronavirus.

Caleb Chung, who turns 13 later this week, was one of the volunteers for the vaccine study. He does not know if he received the vaccine or a placebo. He said the study “was really somewhere that I could actually help out.”

His father, Dr. Richard Chung, a North Carolina doctor, said he is proud of his son.

placebo –n. a substance that is given to a patient in a medical study that has no physical effect

chills –n. (pl.) a feeling of being cold

regulator –n. an official who works for the part of the government that controls a public activity and enforces rules

swelling –n. a condition in which a part or area of the body increases in size